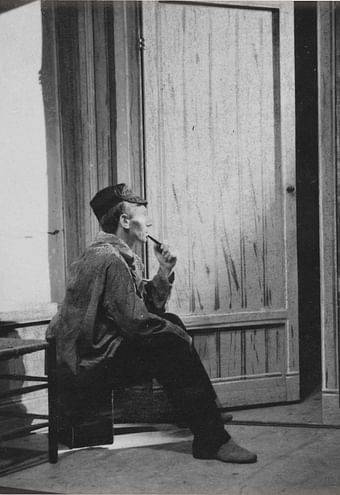 New York, 1916: When the poet Scholem Alejchem is laid to rest, hundreds of thousands line the streets to pay their last respects to the author.

New York, 1964: Almost 50 years after Alejchem's death, the musical The Fiddler on the Roof by Jerry Bock, Joseph Stein and Sheldon Harnick, based on his stories, celebrates its premiere and immediately becomes a worldwide success.

Vienna, 2003: Anatevka, as the musical is called in German, premieres at the Volksoper in a production by Matthias Davids. Balancing humour and seriousness, it becomes one of the audience's most popular productions.

How can this global success be explained? The story itself does not sound like a classical musical: the Jewish shtetl of Anatevka is home to the milkman Tevje, his wife Golde and their five daughters. What starts like a fairy tale turns out to be a highly realistic story: the daughters' marriage plans put the father's sense of tradition to the test - and when a pogrom descends on Anatevka, the family is scattered. The play, however, not only tells of life in the shtetl, its core is a universal story of growing up and fragile traditions.

The action takes place in the small Russian-Ukrainian town of Anatevka, 1905

Act I: The milkman Tevye knows how to remain hopeful and survive in spite of grinding poverty and the hostility of the outside world: one must balance like a “Fiddler on the Roof”, holding on to Tradition.

Tevye is poor in terms of money, but rich in the number of women in his life: he has a wife who speaks her mind, Golde, and five daughters. The three eldest of these daughters, Tzeitel, Hodel and Chava, will have to be married off soon. The girls ask each other excitedly whether the matchmaker Yente will succeed in finding the right partner for them (Matchmaker, Matchmaker), for they feel that “with matchmaking there is no love”. Their father imagines to himself what his life would be like … If I Were a Rich Man.

At Sabbath prayers the family have a guest, Perchik, who has a modern way of thinking. After Sabbath, at the insistence of his wife, Tevye meets the rich widowed butcher Lazar Wolf, who is seeking Tzeitel’s hand in marriage. The two men seal their connection with copious amounts of alcohol (To Life!). On the way home Tevye is warned by the constable that before long there will be a “little unofficial demonstration” … a pogrom.

Tevye has reached agreement with the butcher, but has reckoned without the bride: Tzeitel is in love with the poor tailor Motel. After some reflection (Tevye’s Monologue) Tevye agrees to their marriage, and Tzeitel and Motel are overjoyed (Miracle of Miracles). Now he has to find a way of explaining this to his wife Golde: he invents a dream in which Tzeitel’s grandmother and Lazar Wolf’s deceased wife Fruma Sarah urgently advise him to marry his daughter to the tailor (Tevye’s Dream). The superstitious Golde believes the story, and Tzeitel and Motel are married (Sunrise, Sunset).

An exuberant celebration takes place (Bottle Dance), but the festivities are rudely interrupted …

Act II: The second eldest daughter also surprises her father with wedding plans of her own: Hodel has decided to go to Kiev with Perchik. Tevye is furious (Tevye’s Rebuttal), but in the end he gives the young people his blessing. Tevye explains to his wife that “we are living in different times”, and asks Golde about her feelings for him (Do You Love Me?).

The Rumour is going round in Anatevka that Perchik has been arrested and sent to Siberia. Hodel follows him after bidding her father farewell (Far From the Home I Love).

When Tevye learns that his daughter Chava has agreed to marry the Russian Christian Fedya, he casts her off and in despair asks what he did wrong as a father (Chavaleh, Little Bird).

The constable brings the news that the inhabitants of the shtetl will have to leave their houses within three days – a pogrom is imminent. When he takes his leave of Anatevka, Tevye is also reconciled with Chava. Tevye, Golde and their two youngest daughters Sprintze and Bielke will go to America …