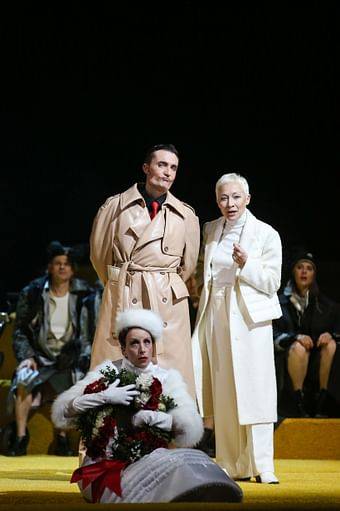 Whoever is best at cheating wins: gangster boss Macheath and king of the beggars Peachum (both entrepreneurs!) engage in a sleaze contest of the finest kind. Peachum's daughter Polly, however, does not see herself as investment capital and marries Macheath for love. The whore Jenny takes revenge with her own means. But a world that rewards only the better crooks cannot be a good one. The Threepenny Opera (Dreigroschenoper) mercilessly exposes what the audience does not want to see: that we are all the ones who support this wickedness.

In 1928 it is already cold in the bourgeois world to which The Threepenny Opera wants to show its wickedness unadorned. And isn't it getting colder and colder? Maurice Lenhard and his team present this classic play with music as a struggle for survival in a cold world: in this version, those who do not yet have a thick skin had best wrap themselves up as well as possible against the frost.

The Threepenny Opera is the first contribution to the Volksoper Wien's new Manifesto series. Under this title, young as well as experienced theatre-makers are invited to think aloud about the how and why of making music theatre. Each artistic team will leave behind a new production and a manifesto at the end, which we will build on in the future.

Money makes the world go around and poverty has become a business: Jonathan Jeremiah Peachum has founded the company Beggar’s Friend, which grants licenses to professional alms collectors that squeeze money out of people by arousing compassion. His daughter Polly is fed up with her life, but pins her hopes on a marriage to Macheath, head of a gang of criminals and her father's biggest rival. The wedding party takes place in secret with a guest of honor: Chief of Police Brown, called Tigerbrown, who makes himself known to be Macheath's buddy and confidant. Peachum and his wife are foaming with rage when they learn of Polly's marriage, but they concoct a plan: If they managed to send Macheath to his doom, they would get rid of their competitor, get their daughter back as workforce, and benefit from her inheritance. Polly, however, has other plans.

Polly tries to warn Macheath: Her father threatens Brown and suddenly the tide turns, old alliances are broken, and betrayal is imminent. Macheath is persuaded to flee. He transfers his criminal business to Polly but insists on keeping his weekly appointment with the whores of Turnbridge. One of them, his ex-lover Jenny, makes a pact with Mrs. Peachum and turns in Macheath to the police. In prison, Macheath has to deal with yet another problem: he promised to marry Brown's daughter Lucy. When she confronts him about his marriage to Polly, he tries to deny it. Polly then shows up and gets into a fight with Lucy. Mrs. Peachum finally ends the scene. Macheath lures Lucy into helping him escape. Peachum comes to the prison to take a delight in the imprisoned Macheath, but he only meets Brown there. Peachum threatens him again: should he fail to bring Macheath to the gallows, Peachum would sabotage the young queen's coronation festivities with his beggar employees.

The deceived Lucy swears revenge on Polly and wants to kill her with poison. Meanwhile, Peachum prepares everything for his coup at the coronation festivities. Jenny shows up and wants Mrs. Peachum to pay her for betraying Macheath. Mrs. Peachum refuses to do so since Macheath has already escaped. Macheath, who has of course celebrated his freedom with a visit to Turnbridge, is again betrayed  by Jenny who blurts out his whereabouts. Brown enters to arrest Peachum and his staff and thus prevent an interruption of the coronation. But Peachum has another ace up his sleeve: he threatens to send to the festivities the true poorest of the poor, whose neglected appearance is not just makeup like it is the case with his employees. Brown is on the brink of despair, Peachum reveals to him where to find and arrest Macheath. Polly and Lucy meet one more time, but only because Polly wants to find out if Lucy knows where her husband is. Both discover that they have been tricked in much the same way by Macheath when news of his re-arrest makes the rounds. Mrs. Peachum brings Polly her widow's clothes. In prison, Macheath tries his usual ways to buy privileges and his release, but since he's out of cash, he fails. Neither his gang nor Polly are willing to rescue him, and he desperately makes a final reckoning with Brown. Macheath is almost hanging from the gallows when suddenly a pardon arrives from the King: Macheath shall live, be happy with Polly, and enjoy his life with a monthly annuity in a castle. All's well that ends well?