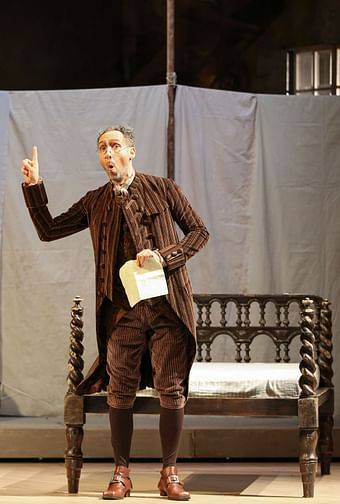 Marco Arturo Marelli’s elegant staging draws attention to how topical this oeuvre is today: the servant girl –practically a slave – gains the advantage over aristocratic authority. It may have been daring at the time of its premiere to present this idea publicly, but the scrutiny of existing power structures has lost none of its urgency. This controversial issue is packaged within plenty of enjoyable slapstick.

Act I: The marriage of Figaro to the chambermaid Susanna is about to take place. However, Susanna warns Figaro that the Count is chasing her and is insisting on the ius primae noctis, the right of the feudal lord to spend the wedding night with his female servants.

Marcellina, Doctor Bartolo’s housekeeper, asks him for help in a longstanding legal case: she once lent Figaro a sum of money on condition that he would marry her if he could not pay his debts. Now she wants to sabotage Figaro’s marriage to Susanna. Bartolo assures her of his support.

The page Cherubino tells Susanna about his troubles: the Count has caught him with Barbarina and sent him packing. Now the Count almost catches him again - Cherubino is only just able to hide as the Count comes in search of Susanna and makes advances to her. Finally the scheming Basilio also bursts into the room, and the Count himself hides. But Basilio’s gossip about Cherubino’s passion for the Countess quickly lures Count Almaviva out of his hiding place. Describing how he caught Cherubino with Barbarina, he discovers the page here, too. Now there is no changing the Count’s mind: he appoints Cherubino a lieutenant in his regiment and orders him to leave the castle immediately.

Act II: The Countess is in despair when she discovers from Susanna that her husband is chasing after other women in the castle. Figaro has meanwhile begun to spin his own web of intrigue: he has passed on to Almaviva a counterfeit letter which speaks of a meeting between the Countess and an alleged lover. In addition, Susanna is to ask the Count for a night-time rendezvous in the garden, at which Cherubino is to appear, dressed as a girl.

With some hesitation the women agree to the plan and begin to change Cherubino’s clothes. Then the Count, furious with jealousy, knocks at the locked door. The Countess hides Cherubino in a closet and locks it. Almaviva believes that his suspicions are confirmed and goes off to fetch tools to break down the door to the closet, taking the Countess with him. Susanna, who has heard everything, lets Cherubino out (he then escapes by jumping out of the window) and hides in the closet in his place. When the door is opened, the Count and the Countess find to their astonishment that it is Susanna who steps out.

The gardener Antonio complains to the Count that a man has jumped out of the window and trampled on his flowers. Figaro has seen Cherubino and says it must have been Figaro himself. The confusion is complete when Bartolo and Marcellina arrive, with Basilio as witness, and insist on the fulfilment of Figaro’s contract with Marcellina.

Act III: Susanna agrees to have a rendezvous with the Count in the garden. But as she is leaving she comes upon Figaro and tells him that their case is already won. The Count feels that he has been tricked and is incandescent with anger.

When Marcellina and Bartolo arrive with the judge Don Curzio to demand that Figaro fulfil the terms of the marriage contract, it turns out that Figaro is the long lost child of Bartolo and Marcellina, stolen away in infancy. The contract is null and void.

The Countess and Susanna have decided to exchange their cloaks after the wedding; the Countess herself will go to the nocturnal rendezvous with the Count. Together they write a letter agreeing on the exact place of the meeting.

In the meantime, Barbarina has dressed Cherubino as a girl. Antonio, Barbarina’s father, has told the Count about this and now reveals the disguise. But before the Count is able to punish Cherubino, Barbarina asks for Cherubino as her husband. Once again the Count’s plans are foiled.

Finally the wedding takes place – not only of Susanna and Figaro, but also of Marcellina and Bartolo. During the celebrations, Susanna gives the letter to the Count. Figaro observes the Count pricking his finger on the pin with which the letter is sealed and concludes that some assignation is afoot.

Act IV: Barbarina is supposed to bring the needle back to Susanna as a sign of the Count’s agreement, but she has lost it somewhere in the garden. Figaro and Marcellina come upon her as she searches desperately, and in this way discover that it was Susanna who gave the Count a letter during the wedding. Figaro is downhearted, but Marcellina regards Susanna as blameless and warns her.

One by one Susanna and the Countess, Cherubino and the Count find their way into the dusky garden. A turbulent game of confusion begins, during which Susanna teases Figaro and Figaro pays her back in the same coin, Cherubino accidentally kisses the Count, Figaro gets his ears boxed and the Count meets his own wife for a tryst, believing her to be Susanna. Finally the Count catches the supposed Countess (who, however, is Susanna) with Figaro. He drums up the people and servants in order to reveal the scandal. But then the true Countess reveals herself; the Count begs her forgiveness, and so the day of madness ends happily.