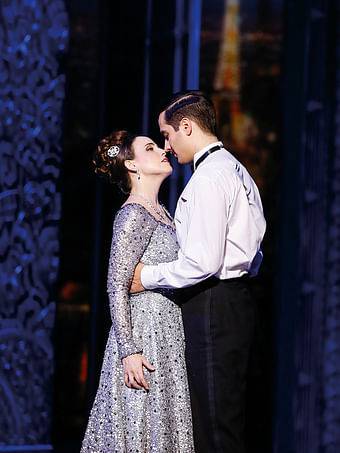 At the end of 1905, The Merry Widow celebrated its world premiere at the Theater an der Wien and thus began its triumphal procession around the world: In a short time, performances followed in Hamburg and Berlin, in London and on the Broadway. The Merry Widow is one of the most frequently performed operettas ever.

Hanna and Danilo became models for the great Hollywood love couples, yet they were excitingly new: Hanna Glawari as a modern woman, equipped with a cheeky mouth and a directness that in no way contradicts her elegance and cosmopolitanism; Danilo as a born vivant who, after the loss of his great love, lives out his days without perspective or task. Their game of attracting and pushing each other away almost deprives the two proud characters of happiness a second time.

Marco Arturo Marelli's production frees the story from excessive kitsch in the tension between personal hopes and society's expectations. The characters, above all the two lovers Hanna and Danilo, break free from their clichés and become people of flesh and blood - and all this with real comedy apart from cheap punchlines.

The background: The cavalry lieutenant Count Danilo Danilovich and the penniless daughter of an estate manager, Hanna, were once happily in love. However, in response to pressure from his uncle, who threatened to disinherit him, Danilo gave up the unsuitable relationship. Hanna then married the rich Pontevedrian court banker Glawari, who died a few days after the wedding. Danilo, who is now a reservist, has been called to Paris as secretary to the ambassador. However, his new task does not satisfy him, and he tries to give his life some glamour by long nights drinking champagne with the dancing girls at Maxim’s.

Act I: At a party at the Parisian Embassy of the small state of Pontevedro, the arrival of Hanna Glawari is eagerly awaited. There is a rumour that the charming widow wishes to marry again. Since her millions will decide the future of the impoverished Pontevedro, the Ambassador, Baron Mirko Zeta, wants to prevent her from marrying a Parisian at all costs.

Baron Zeta’s young French wife Valencienne would like to marry off her ardent young admirer Camille de Rosillon to Hanna Glawari. At the same time she is jealous of her. Camille, however, has no thought of leaving Valencienne. He writes ”I love you” on her fan.

Zeta orders his secretary Njegus to fetch Count Danilo. Danilo is not interested in the concerns of his fatherland, and wants to sleep off his drunken stupor. He is woken by Hanna, who has left the party for a moment. The old wounds of their relationship break open again.

In the meantime, Valencienne has lost her fan, and Zeta and Kromow have found it. The jealous Kromow is convinced that the fan belongs to his wife Olga, and accuses her of being unfaithful. Zeta then requires Valencienne to state that the fan is hers, in order to set

Kromow’s mind at rest. As soon as Kromow has left, Zeta takes possession of the fan in order to give it back to its presumed owner.

Zeta puts pressure on Danilo to marry Hanna. Since Danilo obstinately refuses to do so, he is instructed to keep all Frenchmen who are suspected of harbouring thoughts of marriage away from Hanna. At the ”ladies’ choice” that follows, Valencienne praises Camille’s dancing skills, but Hanna decides in favour of Danilo. At first he brusquely refuses her, but later, when they are alone, he does dance with her.

Act II: Hanna is giving a Pontevedrian party, which she herself opens with a performance of the ”ballad of Vilja”. Danilo also listens to the song of the ”lovesick man”. The search for the owner of the fan continues. Danilo recognises the handwriting of Camille de Rosillon and is now trying to identify Camille’s beloved. He asks several ladies, and in the course of doing so finds out about their extramarital dalliances; but he does not find out the information he seeks. Danilo questions the husbands about their wives’ faithfulness, and all reflect on ”women” in general.

The women are also reflecting about their menfolk. Hanna confronts Danilo as she has noticed that he is keeping the other men away from her. The two of them become closer again. Njegus brings a telegram from the Ministry saying that the Glawari millions must be secured. Zeta, Danilo and Njegus agree to have a meeting at the summerhouse.

Valencienne is trying to finally break with Camille. At last she finds her fan, and writes her answer to Camille’s confession of love: ”I am a respectable wife”. However, she follows him into the summerhouse in order to bid him farewell.
When Zeta arrives for the meeting and finds the summer­house locked, he looks through the keyhole. He discovers Camille and is delighted to shed light on his secret at last, but he grows pale when he sees that his wife is there with Camille. Njegus is instructed to close off the rear exit of the summerhouse, but he lets Valencienne out and allows Hanna to enter.

The confusion is complete when Hanna comes out of the summerhouse. In order to save Valencienne, Hanna announces her engagement to Camille de Rosillon. Danilo is consumed with jealousy.

Act III: Hanna has invited the dancing girls from Maxim’s, and their performance forms the highlight of the party. Danilo takes Hanna to task and forbids her to marry Camille. Hanna explains to him that she did not have a rendezvous with Camille, but has rescued a married lady from an embarrassing situation.

Finally it emerges that the fan belongs to Valencienne. Zeta states that he wants a divorce, and asks for Hanna’s hand in marriage. She points out that according to the terms of her husband’s will she will forfeit everything if she marries again. Zeta withdraws his offer of marriage. Danilo finally confesses his love to Hanna, whereupon Hanna says that upon her marriage her millions will be transferred into the possession of her husband. Valencienne points out to her husband what she has written on the fan – ”I am a respectable wife”. Zeta forgives her.