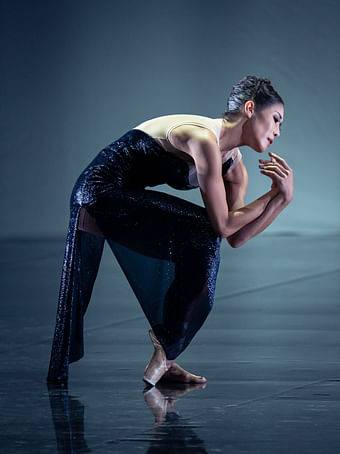 This ballet is not an ascent to Heaven, instead it uses a powerful movement vocabulary firmly rooted on the earth to demonstrate just how much human beings – even in the midst of life – are faced with the shadow of death. However, this dance piece also contains moments of indescribable ease: in its joyful leaps, its subtle exploration of fine balances and delicate disclosure of the divine in our fellow humans.

In »Ein Deutsches Requiem« Martin Schläpfer has chosen one of the most unconventional examples of the death mass as the source for a full-length ballet: an extremely individual score with which Johannes Brahms sought to rise above all the boundaries of religions, denominations and nations and in whose title he would have »happily left out the ›German‹« and »simply put ›human‹«.

After its premiere in January 2021 was cancelled due to Covid 19 regulations, this »deeply touching and thrilling evening of ballet« (Ulrike Burgwinkel, WDR) can now be seen from September 2021 at the Volksoper Wien. Awarded the German Theatre Prize »Der Faust«, broadcast in a lavish television production by ZDF/3sat and acclaimed by press and public alike at guest performances in Israel, Spain, Germany, the Netherlands and Switzerland, the full-length ballet »Ein Deutsches Requiem«, created in 2011, is one of Martin Schläpfer’s most successful works internationally. With his unique art, so physical and yet so fragile, the Director and Chief Choreographer of the Vienna State Ballet embarks on a search for and enquiry into the ultimate questions of human existence.