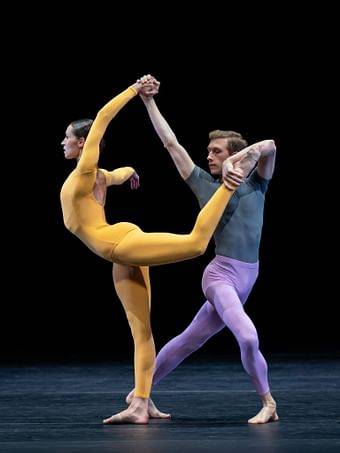 The search for a male movement vocabulary challenges the laws of gravity in a breath-taking way. The inventive counterpoint of Beethoven’s String Quartet op. 133 provided Anne Teresa de Keersmaeker with inspiration for her 1992 piece »Große Fuge«, with which the Vienna State Ballet presents work by this leading Belgian dance artist for the first time. Of course, she is by no means a stranger in Vienna as a result of her regular appearances at Impulstanz and, more recently, the Wiener Festwochen.

However, another new colour in the repertoire is provided by Merce Cunningham – the American visionary who once shook the dance world with his experiments and has now long since become one of the classics. In his »Duets« from 1979/80 he allows twelve dancers to max out the possibilities of dancing in pairs and counterpoints his own movement vocabulary with typical ballet forms. The musical foundation for this extremely humorous piece is John Cage’s »Improvisation III« – an electronic manipulation of drumming by the Irish percussionists Peadar and Mel Mercier.

A classic modernist is Hans van Manen, who celebrates his 90th birthday in July 2022. In his »Four Schumann Pieces«, created for the Royal Ballet London in 1975, we become witnesses to a man’s emotional state – his desires, fears and passions, that are repeatedly criss-crossed by a group of five couples – like shadows from another world. »Four Schumann Pieces« is an elegant ballet in the lucid language of movement and structures in space that are so typical of Hans van Manen, but it is also a ballet full of romanticism and melancholy.