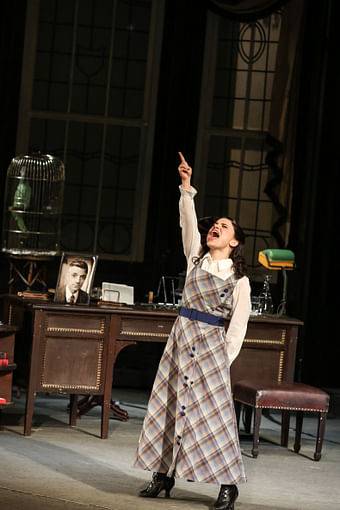 With their 1956 broadway musical "My Fair Lady" Alan Jay Lerner and Frederick Loewe's melodies "The Rain in Spain" or "I could have danced all night" went round the world. The story tells of phonetician Henry Higgins who turns penniless flower girl Eliza Doolittle into a society lady. The professor stubbornly resists falling in love with his "creation".

Act I: The flower girl Eliza is going about her business at the fruit and vegetable market in Covent Garden. Henry Higgins, professor of phonetics, notices Eliza’s original dialect phrases. The street traders standing around warn Eliza, because they take Higgins for a policeman, but he demonstrates his linguistic skills by analysing Colonel Pickering’s accent and telling him exactly where he comes from. The two men introduce themselves to each other – Pickering was on his way to see Higgins anyway. Eliza receives a generous gift of money from him and dreams of a better life Eliza’s scoundrel father, old Mr. Doolittle, waylays Eliza and succeeds in relieving her of a few shillings. Then he carries on drinking …

Eliza comes to Higgins’ language studio and wants to learn how to speak properly so that she can become a lady and open a flower shop. Higgins bets with Pickering that in six months he can make a lady of her.

Old Mr. Doolittle learns of the new company Eliza is keeping and hopes to gain financial advantage from this. He calls on Higgins. Doolittle’s crude attempt at blackmail ends with the payment of five pounds to the old drunkard in return for his daughter. Higgins makes Eliza practise endless elocution exercises, which she finds extraordinarily difficult. Eventually, though, they make great progress and Higgins decides to run the risk of taking her to the races at Ascot with him. At Ascot, Higgins’ mother learns to her horror what her son intends to do with the poor girl. With all the excitement of watching a horse race, Eliza lapses back into her vulgar jargon. Everyone is shocked apart from Higgins, who is amused. Freddy sends Eliza flowers and wants to meet her. But after the disastrous events at Ascot, she no longer wants to see anyone.

Act II: Six weeks later, Higgins is preparing Eliza for her visit to a royal ball. The reception and the ball turn out to be a great success for Eliza.Pickering congratulates Higgins on winning his bet. Nobody takes any notice of the exhausted Eliza who, realising that ultimately she is the one who has achieved the victory, quarrels with Higgins and throws his slippers at him.

Eliza leaves the house and bumps into Freddy, who has fallen in love with her. Unable to stand Freddy’s indecisiveness, Eliza tries to make contact again with her friends at the flower market. She comes across her father, who has received a bequest from an eccentric American at Higgins’ suggestion. The old villain is unhappy because he is getting married and will have to settle down to a respectable existence. In this new life, there is no longer room for Eliza.

Eliza goes to visit Higgins’ mother, who understands her. There she meets Higgins, too, and the two immediately begin to quarrel again. Their argument culminates with Eliza walking out on Higgins once and for all. Higgins goes home in confusion, realising he misses the strange girl. He has grown accustomed to her face. And then Eliza comes back! Why?