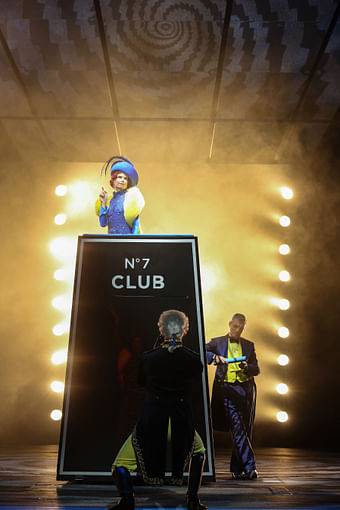 Lady in the Dark

Lady in the Dark

A burnout leads the successful businesswoman Liza Elliott to seek help in psychoanalysis. Between chamber play and musical opulence, a play was created in 1941 that centres on a woman who despairs of the restrictive judgements of her environment. Kurt Weill's musically and dramaturgically extraordinary play unites two opposite poles: the world of the greatest possible inwardness, psychoanalysis, and that of maximum superficiality, the fashion industry.

Kurt Weill's work is retrospectively divided into two central, style-forming periods: the "European Weill", who wrote theatre history as the composer of Bertolt Brecht's The Threepenny Opera, and the "American Weill", who further developed his work in the musical genre on Broadway after his emigration. First performed in 1941, Lady in the Dark allows opulent musical sequences to emerge from chamber-play-like acting scenes and, with Liza Elliott, offers a leading role for a woman who combines social and personal emancipation.

New York. Liza Elliott, chief editor of the fashion magazine Allure, has an appointment with psychoanalyst and therapist Dr Brooks. The well-organised world of the sucessful career woman is beginning to unravel: feelings of general anxiety, stress and panic have been preying on her for a while now. Liza sought help after a dicey argument with her work colleague Charley Johnson led to her suffering a nervous breakdown. Brooks encourages her to have her first therapy session straight away. A song from Liza’s childhood spontaneously pops into her head. This has been happening time and again lately – most recently in a dream. The description of this dream, in which Liza encounters various people in her daily life, suddenly begins to take form...

THE GLAMOUR DREAM (also known as “The Blue Dream”)
The whole world is yearning for Liza Elliott: hymns are sung and poems written in her honour. Only the best is good enough for her, she is celebrated as the "girl of the moment". Furthermore, her success seems to be expressed by one specific colour: everything’s blue! A diplomat from Washington turns up to photograph a portrait of Liza for a new stamp design. The whirlwind of adoration continues apace, but when the portrait is revealed it proves to be a hideous representation which frightens Liza to the core. A nightmare.

Liza encounters characters from her "real life" back at the editorial office. Her assistant Elinor Foster has just been consoling Kendall Nesbitt, the publisher of Allure, on the phone. Not only does Liza have a professional relationship with him, but also a private one – he’s her attractive lover and long-time partner, and he’s also married. The magazine’s entire creative crew is there: editor Maggie Grant covers for her boss whilst columnist Alison du Bois is tracking the latest trends. A tense atmosphere lingers between Liza and advertising director Charley Johnson since their argument at the editorial meeting. Sparks fly when actor Randy Curtis arrives for a photoshoot. Charley Johnson’s evident lack of admiration for the Hollywood beau and permanent cynicism irritates in-house photographer Russel Paxton, who is overwhelmed by the movie star’s handsomeness and aura of glamour. A visit from Kendall Nesbitt gives Liza cause to throw the two squabblers out of the office. Her significant other has important news: he reveals to Liza that his wife has consented to a divorce and that there are now no official obstacles to their love. A feeling of panic suddenly arises within Liza again...

THE WEDDING DREAM
At some sort of gossipy high school renuion, Liza Elliot’s former classmates can’t stop talking about her impending nuptials to Kendall Nesbitt. Randy Curtis, in the meantime, sparkles with an irresistible ballad. He persuades Liza to dance with him and tells her that she has awoken feelings in him he has never felt before. Liza is suddenly torn between two men and this predicament puts her in mind of a fairytale parable from her childhood. All eyes are once more on the bride with cold feet and Liza finds herself at the wedding altar. But the ceremony spirals tauntingly into a menacing backdrop of noise.

The following day at the next therapy session, Doctor Brooks correlates Liza’s self-image as described in her dreams with current events in her life. Liza leaves the practice frightened and bewildered in response. Back at the editorial office, Liza keeps trying to get a grip on her private and professional life, but her relationship with Kendall Nesbitt is noticeably cooling and on top of that, she is confused by the fact that Randy Curtis is now making genuine advances towards her. Then Charley Johnson tells her he wants to quit to become the editor of a different magazine. When Liza has to make a final decision between two potential front covers for the Easter edition, she is suddenly hounded by inner voices... and she finds herself in a carnivalesque daydream.

THE CIRCUS DREAM
In a circus ring filled with jugglers, clowns and artists, Russel Paxton announces “The Greatest Show on Earth” in the guise of ringmaster. A major trial against Liza Elliott, the woman who can’t make up her mind! Prosecutor Charley Johnson, defence lawyer Randy Curtis and key witness Kendall Nesbitt are called to the ring. In her spectacular final defence speech, Liza tells a story about Jenny, a woman who always made a definite decision – but always the wrong one. The mob is just as unrelenting in Liza’s third nightmare: “Make up your mind!”

In ensuing conversations, Doctor Brooks sets Liza’s mind back to key moments in her youth and childhood. Liza Elliott comes to understand the significance of the children’s song which she recalled at the start of therapy and which will ultimately be the key to her personal happiness.