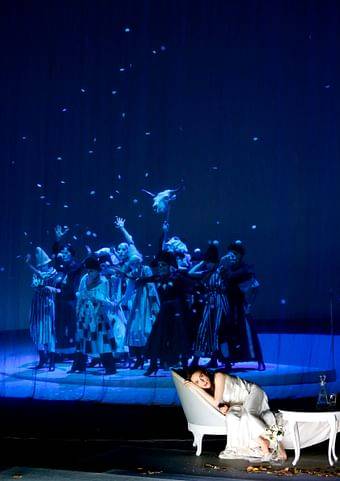 in Italian language with German surtitles

in Italian language with German surtitles

The well known tragic love story between the high-class coutesan Violetta and Alfredo, son of a respected Parisian family. With Alfredo the beautiful high-class courtesan Violetta finally finds true love. After a brief spell of happiness enjoyed together Alfredo's father manages, nevertheless, to convince Violetta of the social damage this relationship causes his family. In desperation, she leaves Alfredo and throws herself into the Parisian demimonde with disastrous effects on her health,already ravaged by consumption. Reconciliation comes too late.

Act I: Paris, 1850. The courtesan Violetta Valéry is hosting one of her lavish parties. Gastone, one of the guests, introduces his friend Alfredo Germont to her. He has been an ad­mirer of Violetta for a long time, and while she was ill would come every day to ask how she was. Violetta is impressed by his honest devotion. As he leaves she gives him a camellia she is wearing and tells him he may return to her when it wilts – that is, the following day! Alfredo’s words linger in her mind: might she allow a ­serious love to enter her life, or should she continue to rush from one Parisian pleasure to another?

Act II: Violetta and Alfredo have been living together in a house in the country near Paris for three months. She has given up her former life and without Alfredo’s knowledge has sold the greater part of her possessions. When Alfredo finds out about this, he rushes off to Paris to prevent any further sales.

While he is gone, his father Giorgio Germont appears and asks Violetta to leave Alfredo. Alfredo’s sister is betrothed, and her fiancé will break off their engagement if her brother continues with his scandalous lifestyle. Germont remains resolute even when Violetta tells him she is incurably ill. Finally Violetta consents and asks Germont to tell his daughter of the sacrifice she has made.

Violetta is writing a farewell letter when Alfredo unexpectedly returns. She wants to hear him say one more time that he loves her, then she leaves him. When Alfredo receives the letter, his father is there to comfort him. He wants to take him back to his home and family in Provence. Unmoved by his father’s request, Alfredo follows Violetta to Paris.

Accompanied by her former lover Baron Douphol, Violetta is attending a party at the home of Flora Bervoix. Alfredo is also there. There is a dispute with Douphol over a game of cards; Alfredo wins the game. In front of the entire company, he throws his winnings at Violetta’s feet, in payment for the time they had together. Alfredo’s father observes the scene with horror – he understands Violetta’s nobility of character and rebukes his son.

Act III: Now in deepest poverty, Violetta lies on her deathbed, with only her servant Annina and Doctor Grenvil to care about her. The merry sounds of the carnival are heard from outside. Violetta has received a letter from Germont: Alfredo has wounded Baron Douphol in a duel and has had to leave Paris for a while. Germont promises that he will return with Alfredo. But they are too late. Violetta dies.