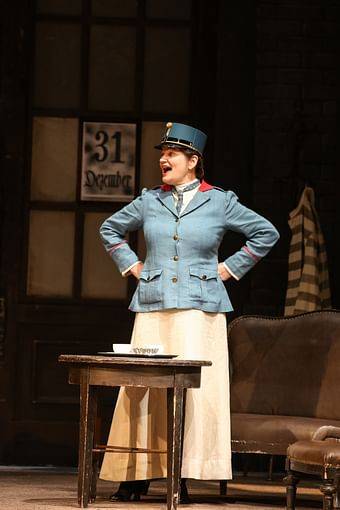 This quintessential Viennese operetta deserves to be enjoyed throughout the year, and not just on New Year's Eve. Eisenstein evades a summons to serve a brief prison sentence by accepting Falke's invitation to Prince Orlowsky's party. His wife's former beau Alfred is escorted to jail in his place, having been mistakenly identified as Eisenstein. At the party everyone plays an assumed part, and later must share in the quilt of deception. A drunken prison guard, a stolen watch ... somehow everything is worked out in the end and the operetta's motto "Glücklich ist, wer vergisst, was doch nicht zu ändern ist" ("happy are they who forget what can't be changed") rings true.

Act I: The home of Gabriel Eisenstein. The chambermaid Adele is listening to a serenade sung by a former admirer of her mistress Rosalinde („Täubchen, das entflattert ist“). She has just been invited by her sister Ida to attend a ball given by the rich Prince Orlofsky, and, in order to get the evening off, she invents a heartrending story about a bedridden aunt whom she has to take care of. Rosalinde refuses, since her husband Gabriel, who has been sentenced to five days in jail for disorderly conduct vis-à-vis an official, is to report in prison that very same evening. Wailing, Adele rushes from the room. Alfred, the moonstruck tenor, enters; his voice has always thrown Rosalinde into an emotional turmoil. He coaxes her into an invitation for supper after Gabriel has left for prison and leaves in high good humour. Enter Eisenstein accompanied by the stammering lawyer Dr. Blind. He is boiling with rage. The lawyer has bungled his defence to such an extent that the sentence has been extended to eight days. Eisenstein kicks the sputtering man out of the room, orders Adele to fetch him a very special “last“ meal from the near-by inn and asks Roaslinde to prepare his shabbiest clothes for prison. Eisenstein’s crony, Dr. Falke, comes and invites him to accompany him to Orlofsky’s ball. He soon manages to override Eisenstein’s initial reluctance and tells him he can go to jail in the morning. When Rosalinde returns, she is amazed to find her husband in high spirits. He has changed his mind, asks for full dress “by which he will distinguish himself from the rabble in prison” and joyfully leaves after taking a very touching farewell. Adele is surprised to learn that, after all, she may take the evening off and is no longer needed.

As soon as Eisenstein has left, Alfred, who has been watching outside, enters the house and makes himself comfortable in Eisenstein’s dressing gown; he drinks his wine and again uses his voice to cast a spell over Rosalinde, who was on the verge of doubt about the whole situation (“Trinke, Liebchen”). Suddenly the doorbell rings - Frank, governor of the local prison, has come to fetch his illustrious client in person (“Mein schönes großes Vogelhaus”). Roslinde has no choice but to present Alfred as her husband, who, in turn, cannot very well compromise Rosalinde and therefore does not protest against being arrested, but makes the best of the situation by taking a very tender farewell of Rosalinde.

Act II: A great number of guests have assembled in Orlofsky’s villa. Falke introduces Eisenstein as ”Marquis Renard”. Orlofsky offers him a drink and explains that in his house every guest may do as he pleases („Ich lade gern mir Gäste ein“). Adele appears in her mistress’s very best evening robe. Her sister presents her as an aspiring actress, but Eisenstein recognizes her. When he mentions her close resemblance to his chambermaid she plays the role of an highly insulted lady (song “Mein Herr Marquis”). Frank, the governor of the prison, is announced as “Chevalier Chagrin”. He immediately strikes up a friendship with Eisenstein whom he has never met before. Finally Rosalind comes in. She, too, has been invited by Dr. Falke and is masked as a Hungarian Countess (czardas “Klänge der Heimat”). She is dumbfounded when she finds her husband, whom she believes to be languishing in prison, in very gay company. Eisenstein is immediately attracted to the beautiful masked unknown and begins to flirt with her, which gives her the chance to get hold of his watch as proof of his loose behaviour (duet “Dieser Abend”). Supper is announced. Eisenstein recounts how he once made Falke an object of ridicule of all the street urchins, when he deposited him, dressed up as a bat, in the middle of the street when they were returning from a masked ball in the early morning. With a malicious smile Falke points out that the day is not yet over. The ball continues and not until the clock strikes six there is a general rush for the door. Frank has to leave for his office in jail where Eisenstein should already be securely settled in his cell.

Act III: Very much the worse for wear, Frank arrives in his office and is received by the prison warden Frosch, who is never sober. Frank immediately falls asleep in his chair, but is rudely aroused by Frosch: Adele and Ida have come to ask his “protection” for Adele; seeing herself in the role of an actress such as she had played at the ball, she wants the “Chevalier Chagrin” to become her patron. Hardly has she given a sample of her talent with the song “Spiel ich die Unschuld vom Lande” than Eisenstein is announced. Frosch locks the two girls into a prison cell to get them out of the way. Frank and Eisenstein, both suffering from the after-effects of a tremendous hangover, reveal their true identity. Eisenstein sobers up on the spot - who then, is the man that Frank - as he delightedly recounts - had arrested in his own living room, in his own dressing gown, last night? Most opportunely Dr. Blind comes in to intervene for the fake Eisenstein, who is still in prison. When Frank leaves the room, Eisenstein grabs Dr. Blind’s wig, his coat and briefcase, throws the lawyer out and dresses up as Dr. Blind.

In the meantime Rosalinde has come to see Alfred. He is led into the office and both complain about unfaithful Gabriel, who has spent the whole night in the company of dashing girls. Rosalinde says that she will scratch his eyes out before suing for divorce. Livid with anger and jealousy Eistenstein wants to throw himself into a furious denunciation of his wife, when she dangles his own watch before his eyes as proof of his faithlessness. The others come in and Dr. Falke explains that he has staged the whole comedy only to take revenge for the “bat” affair of last year. Eisenstein has no choice but to go down on his knees, beg forgiveness from Rosalinde and serve his term. Orlofsky will take care of Adele, and all’s well that ends well. After all, there is no one to blame - but the champagne.